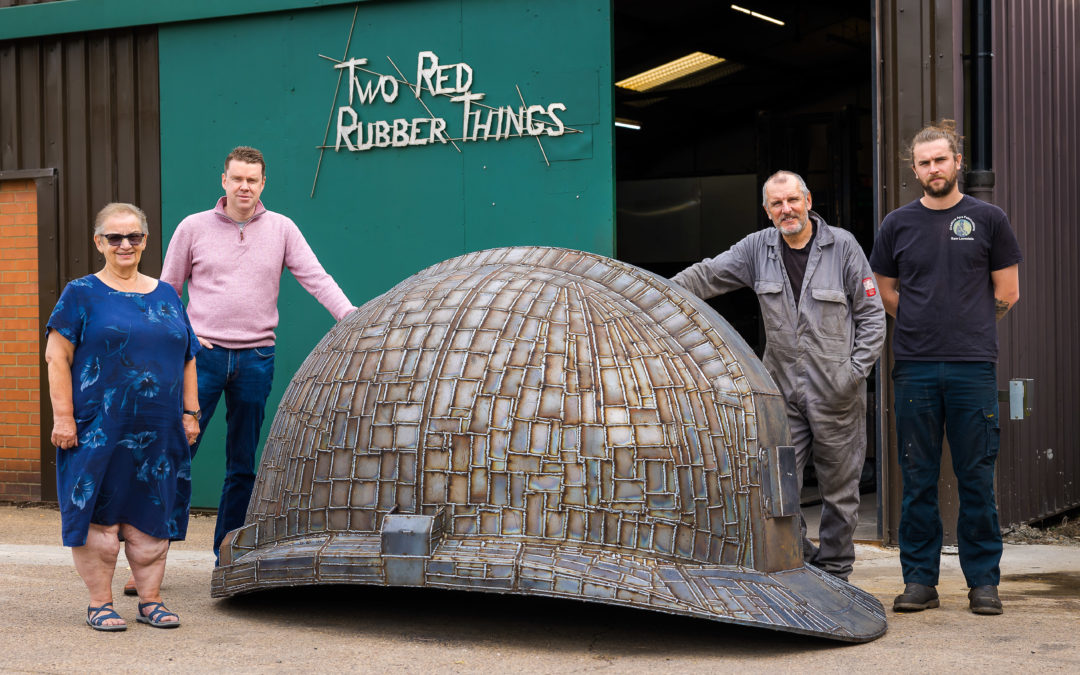 Stunning images of a centrepiece that will stand on a significant development in Houghton have been unveiled today.

Ray Lonsdale, who was commissioned using funding from the Coalfield Area Committee, has been crafting a showpiece sculpture that pays homage to the industrial heritage of the former Houghton Colliery site, which is set to be revamped into a new retail hub.

Councillor Kevin Johnston, Dynamic City Cabinet Member, who is part of the committee that commissioned the piece, has been out to visit Ray’s South Hetton studio, to see progress on the piece which will be completed over the coming months, though it is not yet clear when it will be possible for the artwork to be installed to its permanent position.

Work on the wider development of the Houghton Colliery site is set to begin later this year, with a number of environmental studies still underway that require surveys to be carried out over the summer months. Sunderland City Council’s cabinet agreed to sell the former colliery – which had been empty for 40 years – to Hellens Group and Fintry Estates in 2019, and plans were approved last year for £15 million town centre retail extension scheme, which will include a Tesco supermarket, and popular discount brand, Home Bargains. In total, the two stores are expected to create around 100 new jobs. The sculpture will stand close by, as a permanent tribute to the coal mining past of Houghton.

Cllr Kevin Johnston said: “This is a poignant tribute to the city’s industrial heritage and a piece I am really proud we have been able to deliver for the people of Houghton, whose past is very important to them.

“The piece is looking fantastic, and we’re looking forward to working with officers at the council to agree a plan for its installation.”

The piece – which will be visible from the end of Newbottle Street – represents the end of the pits, depicting people hanging up their equipment for the last time.

Cllr Juliana Heron, Labour’s Houghton ward councillor, said: “This important site is being brought back into use and ensuring we have a fitting focal point for people visiting, that celebrates the past of the area, is something I am really pleased to see moving forward.

“Ray is an incredible artist and his work on this sculpture is magnificent. We’ve seen the reaction to Ray’s existing artwork across the city and wider region, and we’re sure this piece will touch people in the same way.”

Hellens Group are exploring the possibility of lighting as part of the technical specification for the artwork installation, to ensure it continues to have impact by night.

Ray Lonsdale is the artist behind Seaham’s famous ‘Tommy’. He has also been commissioned by the council to deliver three new pieces for Riverside Sunderland in the city centre, one of which, Gan Canny, already stands proudly in place close to the Magistrate’s Court on Keel Square.

We use cookies to ensure that we give you the best experience on our website. If you continue to use this site we will assume that you are happy with it.OkPrivacy policy