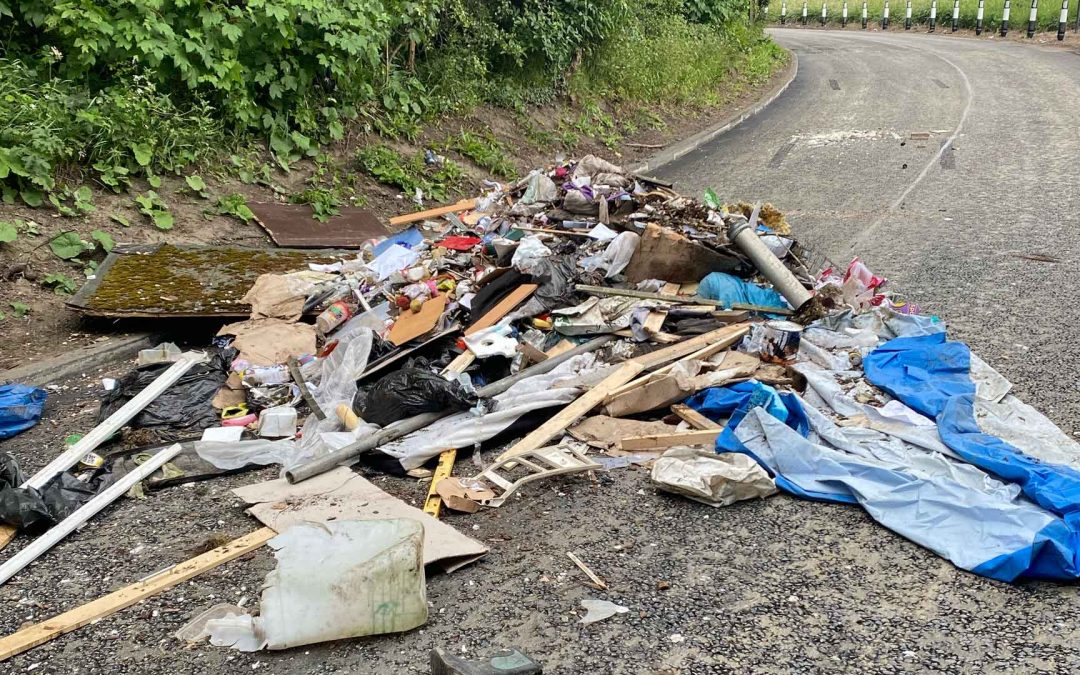 A SILKSWORTH councillor has hit out at an ‘irresponsible fly tipper’ who dumped a van-load of rubbish in the middle of a busy Sunderland road.

Labour’s Councillor Phil Tye, who represents Silksworth ward, has condemned what he described as a ‘mind-blowingly selfish act’, after a large amount of rubbish was left thrown across the normally busy road, which is currently closed for resurfacing.

A pile of wood, bricks, metal and debris was illegally dumped on the road – which runs between Tunstall and Silksworth – on Monday afternoon. The volume of rubbish left meant the council had to bring in a tractor and a full team to clear the site this morning.  Though the road was closed at the time, as teams carry out resurfacing work and safety improvements, the disgraceful act has left city taxpayers with a hefty bill.

Cllr Tye, who has served as a councillor in the Silksworth ward since 2006, said: “This is one of the most shocking and reckless instances of fly tipping I can recall seeing in my time as a councillor and shows utter contempt for other residents, who ultimately pick up the bill for this unbelievably stupid act.

“We will be doing everything in our power to find out who was responsible for this appalling incident and will ensure that they feel the full impact of the measures we have available to us.”

It is thought the waste was dumped on Monday evening, and Councillor Tye is appealing for anyone with information to come forward.

“Acts like this are not only dangerous, they cost the taxpayer money at a moment of national crisis, in which council resources are stretched to their absolute limit.

“It’s a shameful act, and I’d urge anyone with information about who may have been responsible to come forward. Fly tipping is a blight on our communities and we have seen a sharp rise in instances during the pandemic.

“Frontline staff at the council have worked tirelessly throughout the COVID-19 crisis to keep services running, and selfish fly tippers repay them by dumping rubbish without any regard for their sacrifices. It’s disgusting and we’re determined to stamp this out through tough enforcement action that means people simply do not take a chance.”

Labour councillors introduced tougher measures to combat litter louts illegally dumping waste across the city in 2019. Fly tipping is an arrestable offence and carries a maximum fine of £50,000 and up to five years imprisonment. Councils also have powers under the Control of Waste (Dealing with Seized Property) (England and Wales) Regulations 2015 to apply to confiscate any vehicle they suspect of being involved in environmental crime or fly-tipping.

Labour Councillor, Michael Mordey, deputy leader of the council and cabinet member for environment and transport, said: “There are too many people who seem to think they can dump rubbish wherever they like and this is one of the most outrageous examples of fly-tipping you’re ever likely to see.

“As a Labour council, we are steadfastly committed to stamping this out and ensuring that our residents enjoy a clean, green city that is free of waste dumped by a mindless minority.”

Anyone with information about the incident should contact the council’s Environmental Services Team on 0191 520 5555.